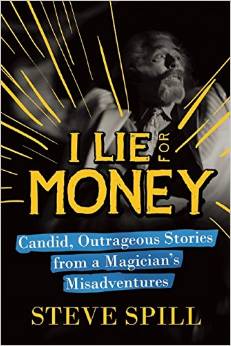 He had me at ten-foot nose hair.

But let me back up  a moment. Steve Spill is a magician. Probably a lot smarter, harder working, and more creative than your average magician. And he’s written a ridiculously entertaining book about his life and adventures as a journeyman magician trying to make a living from his art. As it turns out, he’s been pretty successful at it for over forty years, and in the process he has built his own magic theater, Magicopolis, in Santa Monica, where he and wife, Bozena, star.

Now when I say successful, I don’t mean David Copperfield successful or David Blaine successful, but successful in that every night he gets to go out and entertain people with his art. Every day he gets to think about crazy ideas that he can add into his show. And lucky for us, magic fans and general readers will soon be able to read Spill’s account of his creative life, due out in May, called I Lie for Money: Candid Outrageous Stories from a Magician’s Misadventures.

The book is a trip through the mind and life of Spill, a man who has met everybody. Well, that is, if your idea of everybody is Dai Vernon, Charlie Miller and, Francis Carlyle. It’s certainly my idea of everybody. Reading Spill’s book is like sitting at a bar hearing entertaining stories told by a really good raconteur, and the more you want to hear, the more he tells. You know you should be getting on home, but you can’t resist one more drink and one more story. Though the book is about 250 pages, I read it all in one night. It’s very quick reading, and you’ll chuckle throughout. The book is well-written and well-edited. But above all, Spill knows how to tell a good story. Though I’ve never seen Spill in person, you can tell that he must please his audiences greatly with his quick wit and well thought out magic.

Back to the ten-foot nose hair. Spill has a chapter on his failed ideas. I really like this chapter because as Spill says, “Part of the reason I wrote this book was to share with those who wish to craft a self-directed creative life—be it an actor, painter, writer, comedian, magician, or whatever—and describe how one can survive in rarely profitable but rewarding professions.” That’s why this book is for the general public as well as magic aficionados. He talks about the relentless drive to create and improve, and that drive necessarily entails failing.

One of these (brilliant!) failed ideas was to put a tiny reel in his nostril and then pull out a ten-foot length of thread from it. As he pulls on the thread he complains that his damned nose hair is growing too fast again.

How could you not love the guy after that? He actually built a prototype of the reel and tried it out before audiences. They, unfortunately, were not as enthusiastic about the idea as Spill was. Philistines.

Other chapters in the book include “Out of Africa,” a chapter about his encounter with an African medicine man (spoiler: the medicine man steals Spill’s Bill in Lemon method for his own purposes), and in a final romantic valentine to his wife Bozena, he has a chapter touchingly titled “How Joan Rivers Got Me Laid.”

Spill drops more names than a Metro PCS phone drops phone calls, but it’s all in good fun, and hey, he’s entitled to it. Bob Dylan, Penn and Teller, Sting, and many more get mentioned. He writes, “I’ve tried to beat down my vanity, but anyone who writes about himself is apt to fall into the magician’s habit of peeking at the deck to find out where the aces lie. This tome is my fist full of aces.”

If you have any interest at all in any of the creative arts, or if you are just looking for some good gossipy fun, then I recommend you cut to the aces and pick up Spill’s book as soon as it comes out. Click on the above photo for details.

P.S. You can hear me interviewing Steve for radio station WBAI 99.5 FM NYC here and here