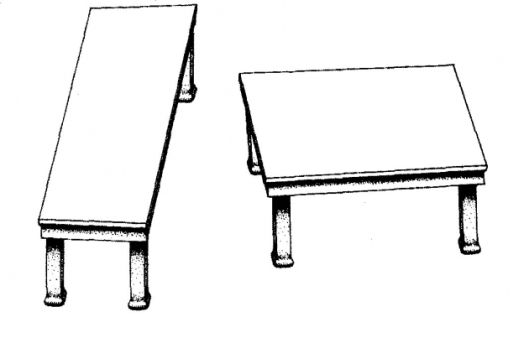 As our minds begin to play tricks on us during the ongoing unpleasantness, perhaps we might take solace in realizing that our minds were always playing tricks on us anyway.

Above, the Shepard Table illusion, brought to my attention by Bill Mullins of the Genii forum. The table tops (not the thicknesses, just the top surfaces) are identical parallelograms. If you’re like me, you’ll say, WTF, no way–the horizontal table top has a smaller length and a greater width than the vertical table top.

What’s happening is that the table legs and their angles induce a false sense of perspective, altering our perception of the length and width of the objects. Instead of treating the parallelograms as 2-dimensional objects we are interpreting them as 3-dimensional objects.

When the legs are re-aligned, the distorting effect is lessened:

But again, if you’re anything like me, you’ll nod your head, and think, yeah, but I still don’t really believe they’re the same.

So what your intrepid reporter did (and you can do it too!) is take a screen shot of the initial picture of the two tables up above and print it out.  I cut the picture in two, separating the tables, and then carefully cut out only the tabletop of the horizontal table. I rotated the piece and placed it on top of the vertical table top.

Here’s a video I made of doing that:

It was a perfect duplicate. The situation was the same. Only the perspective had changed.