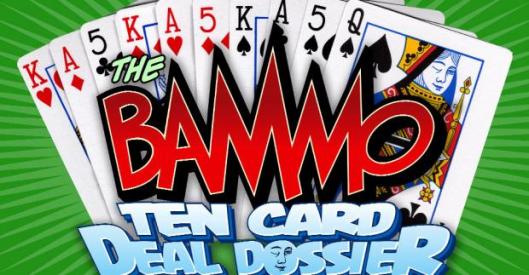 If he had given us the Bruce Elliott Phoenix write-up, but not the Harry Lorayne routine; Dayenu! It would have been enough.

If he had given us the Harry Lorayne Routine, but not the Stewart James spelling idea; Dayenu! It would have been enough.

If he had given us the Stewart James spelling idea, but not the Paul Curry “Cider!” innovation; Dayenu! It would have been enough.

If he had given us the Paul Curry “Cider!” innovation, but not the Bruce Bernstein Psyche Out routine; Dayenu! It would have been enough.

Fortunately, Bob Farmer, the entertaining Canadian magic creator, writer, and all around flim-flam man has given us all of the above, and more, in his new treatise on the Ten Card Deal, The Bammo Ten Card Deal Dossier.

The Ten Card Deal is the classic card effect which, in its most basic form, has the performer deal out two hands of poker; and yet despite the spectator having all kinds of choices in the distribution of the cards, the performer repeatedly wins.

The method behind the trick is devastatingly simple, and its very simplicity has inspired literally scores of devilish variations. Farmer, while disavowing that he is trying to document every version, has collected and described in his book dozens of the best variations, so that only the most churlish could dispute the word encyclopedic. If you have any intention of performing a gambling routine, you would be foolish to pass this book up—even if you are familiar with the original version of the trick.

The key problem in a book like this is how to organize the material. If it indeed is to be, intentionally, an encyclopedia, then the key is consistency: find an organizing principle and stick to it. That could mean alphabetically or chronologically, for example. But the Farmer book is organized about a much happier principle than an encyclopedia. In my opinion, its guidepost is readability. The chapter headings are grouped more by methodological considerations than anything else, and while this often coincides with the historical chronology, sometimes it doesn’t. The book begins with an overview of the history of the effect and the various stratagems employed, and then gets down to the individual routines. The book in many ways reminds me of another book solely devoted to one classic magic effect, Switch, Jon Lovick’s treatise on the Bill Switch. Both are comprehensive, intelligent, but above all, useful readable guides to a great effect.

Oh, and funny, too. The copyright page reads: “Thieves will be tracked down and torn apart by packs of pit bulls that have been starved for days, given the offender’s scent and told, “It was this man who took your mother away.” And each chapter begins with a quotable quote such as “I became a policeman, because I wanted to be in a business where the customer is always wrong.”

Like Switch, the writing and descriptions are so clear, and the material so clever and compelling, that one can almost read through the book straight through rather than just dip in and out of, as you would most reference books. Again, because Farmer has not restricted himself too strictly to any one organizing scheme, he is able to connect one effect to another in a loose, associative way which makes for more enjoyable reading. My only quibble would be that I think all the gaffed-card versions should be separate from the ungaffed versions, but that is a matter of taste.

So let’s get down to the routines themselves. For me, the strongest routines are just that—routines. It seems to me, that an important aspect of the effect of the Ten Card Deal is the fact that the magician repeatedly keeps winning, despite increasingly more difficult conditions. Though there are quite a few descriptions of variations here that have only one phase, I think those are much less successful, no matter how clever the method or how free the deal appears to be. Because, when it comes down to it, in my opinion, in a two-handed situation the audience’s perception of just one round of poker is that it is a fifty-fifty proposition. Either the performer wins or the performer doesn’t. Either the spec wins or the spec doesn’t. More important than what the odds would actually be, is what the audience feels the odds to be (see ACAAN!). And, again, in my opinion, the payoff for a one phase trick, with procedure to boot, is just not enough.

So early on, we are given Harry Lorayne’s ground-breaking routine. And if Harry Lorayne has given card magic nothing else, it’s the ability to milk all the entertainment value possible from a card trick. Most magicians know the basic principle behind the Ten Card Deal, but the beauty of the reprint of Harry’s routine here is that it gives every nuance, joke, and scripting idea that Harry has applied to this routine over the years. Memorize the script and structure of this routine and not only will you have a killer anytime, anywhere card routine out of the box, but you can use the same structure and script to fashion other variations from the other ideas in this book that might strike your fancy.

Speaking of fancy, my favorite routine in the book is Bruce Bernstein’s five-phase eighteen-card deal called Psyche Out. It is based on Nick Trost’s brilliant observation that with eighteen cards, it is possible to have two alternating nine-card stacks, with the all-important tenth card being a card from the other stack. The beauty of this arrangement is that because the tenth card is always different, there is no pattern for the spectator to discover, and the ensuing procedure can have far greater latitude. Bernstein’s routine has a great dramatic build, and again it is an anytime, anywhere killer. The performer keeps giving the spectator more and more freedom in the choice of the cards to be selected, yet somehow the spectator can never win.

Well I could go on and on, but suffice it to say that the entries  by J. K. Hartman, Alex Elmsley, Jon Racherbaumer, Tomas Blomberg, John Bannon, and Joshua Jay, among others, assure that the reader will have the toolkit to put together a routine that will fit his or her liking.

In the latter half of the book, Bob reprints some of his Flim-Flam columns originally written for Magic Magazine, and he has an extensive section on Blackjack effects. Most of the Blackjack effects are single phase, but Bob suggests some ways to use them as lead-ins for a ten card poker routine, and this might make for a complete gambling act. To round out the book, Farmer has a chapter on packet switches, and a nicely annotated bibliography.

The physical book itself is quite attractive. Published by David Ben’s Magicana, it is in a format similar to The Feints and Temps of Harry Riser book. It’s a 9″ x 11″, sturdily bound 400 page volume, with quality paper. It was edited by Matthew Field and Michael Vance, with useful illustrations by Tony Dunn. There is a last minute one-page addendum tipped in, the addition of another routine with some very good presentation ideas.

The one problem with a book like this is that there are so many great ideas that I wish there were more signposts along the way, saying: Don’t Miss This One! Of course, part of the fun is in the re-reading and finding those nuggets in paragraphs that you’ve read or skipped over before. Read it and learn the Cardperson’s true Bible story of Jonah!