The great magician and escape artist, Harry Houdini, had a Doppelganger of sorts—his own younger brother, Theo, who performed under the name of Hardeen. Hardeen also did an escape act, duplicating many of Harry’s effects, and it has been said that Hardeen was the first to perform the straitjacket escape in full view of the audience.

A short time after Houdini’s death, Hardeen did some performances in Brooklyn off the back of a truck as a publicity stunt. Fortunately there was a movie camera there to record his version of one of Harry and Bess’s signature effects, “Metamorphosis.” You can view this wonderful trick—still performed by many illusionists today—by clicking on the video above. Filling the streets, there are lots of hats to be seen, but very few women. The background is the area near Brooklyn’s Borough Hall. Hardeen was scheduled to play at the nearby Prospect Theater.

If anybody knows who the people are that are assisting Hardeen, I’d appreciate it if you could drop a comment here. 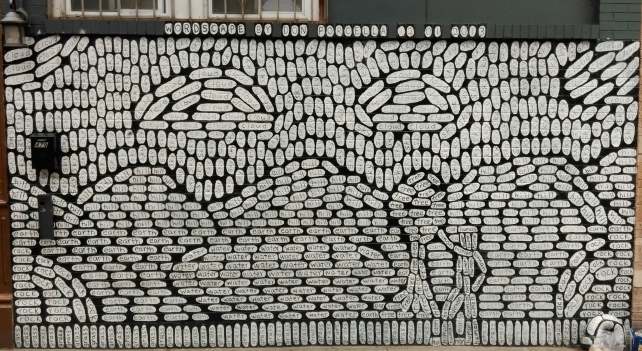 A happy find yesterday in Bay Ridge, Brooklyn. You really have to click on the picture of this wall sculpture to fully appreciate what’s going on in it.