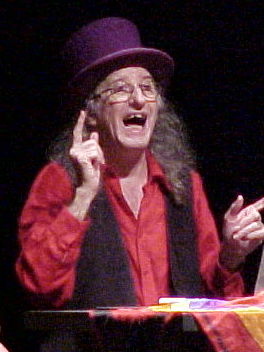 “So to make things fair—even though it is not easy to be fair in a capitalistic society—each time I earn money from performing magic, I would have to give a portion to Ascanio’s widow, Slydini’s heirs, and many others and say, ‘Here, please, this is your portion of my success.’ “—Juan Tamariz

Over a cup of coffee at a back table at the magic convention, a magician is informally doing magic as a crowd of onlookers watch. The people in the crowd nod their heads knowingly in approval, or they throw in their two cents to make suggestions at this “session.” The young magician has great chops, an engaging personality, and an easy laugh. You feel an instant warmth, a comradely attitude. He’s not trying to prove his superiority, he just wants all of us to have fun and experience the magic.

At one point, a know-it-all makes an arrogant criticism; about to defend himself, the young magician stops that impulse, and steels himself, as if to say, “No, I’m not going to defend myself, I’m going to listen to it all, be humble, and take it all in.” I think to myself, this young man has been mentored and parented well.

I wish I had been able to find that magician again,  to talk with him about that incident. It was such a great attitude. It must have come from somewhere. The magician had a Hispanic last name, but I had no idea whether he came from Spain or not. Nevertheless, I think this young man has absorbed much of the spirit of what’s now come to be known as the Spanish School of Magic.

By Spanish School of Magic I am talking about the style of magic that is exemplified by Juan Tamariz, Gabi Pareras, Dani DaOrtiz, Miguel Angel Gea and several other younger magicians, many who have been mentored by Tamariz himself. There are sometimes discussions on the magic internet forums as to the distinguishing features of this school of magic, but for me, the most important—and often overlooked—aspect has to do with emphasizing the feelings of friendship between the magician and the audience. It’s much more than just an approach to constructing an effect, or the means utilized for the method, though there’s a lot of that, but it’s also about consciously constructing a relationship of comrade-to-comrade with the audience, rather than competitor-to- competitor. It’s akin to, but not quite the same as, Gerald Deutsch’s conception of Perverse Magic.

If magic is about power—and it is—then it’s natural to ask, who gets to keep that power? In a sense—let’s say metaphorically, for now—it’s a question of capitalism versus socialism. Does the individual get to keep all the power s/he accrues individually, or is the power going to be shared among the community? For convenience, I’m going to describe two styles of magic: capitalist and socialist. If you don’t like those words, you can substitute two other labels, though I think there may well be a good reason to use those particular terms.

It’s enlightening to look at the experience of magic for many audiences: the capitalist magician’s effort is to widen the power inequality perception, seeking to put the magician far above its audience. “Admire me because I am so much more powerful than you,” implies the capitalist magician. After all, real capitalists like to proclaim that the most wise, the most moral, the most worthy, the most capable of solving all problems—business and otherwise—are those with the most power.  So it’s natural that some magicians would strive to emulate those models. But the Spanish School approach is the opposite. The socialist magician is not your superior; on the contrary, he’s your bar buddy, the guy you want to hang out with, or the lovable eccentric, maybe the town Foole, who wants nothing other than to delight you and to be friends with you. The socialist magician has somehow won or been gifted his power, and now he wants to share it with you. I say “he,” because while it is changing, some of it does have an undercurrent of sexism; in that comradely fraternity, there’s the assumption of mainly male bonding. Now here’s the leap, you can take it with me if you like: it’s like the aura of the Ortega boys during the Nicaraguan revolution and the Castros during the Cuban revolution. The masses loved them because they were the boys who made good, the brothers who stuck together and won power for the people. “You’ve won the power, we admire you, we thank you for it, and we have no fear of you at all, because we know you are going to share that power with us.” Whether those promises ever came true politically is an issue that I won’t get into here, but the point is the similarity between the revolutionary and his audience on the one hand, and the socialist magician and his audience on the other.

A nice Cuban magician I discussed this with didn’t  agree with my characterization of the socialist personality as the driver of the Spanish School’s attitude towards magic, but rather he attributed it to the close family ties in Spain. He reminded me that many Spanish men live with their parents up until the time they get married. Well, yes, but what is a family but a group of people who care for each other, and work with each other, and are committed to each other?

At any rate—and I’ll add here the fact that Tamariz in the 60s lived in a commune with 15 or 20 other people and was thrown out of his university for opposing the Fascist Franco regime—the Spanish model is of the community member who gives back. He makes good and returns to buy his Mom a house, he pays for his sister’s college, he buys a round of drinks for the boys at the pub, he plays with and entertains his nephews with laughing magic. It’s the understanding that the magic itself is only important so far as it engenders positive  relationships. The magician makes the whole community feel more powerful because of his skill and talent, and the magician knows that what he is doing—that is, his effect on his audience—is not just a personal good but a social good as well. It’s his social responsibility to share what he has. He shares with his comrades this wonderful gift of inducing the magical feeling in others. They laugh together about how wonderful it feels, and how happy they are to have each other.

Now it’s true that some capitalist magicians also see the dilemma of declaring themselves all-powerful magicians, and so they, too, seek to ameliorate the power imbalance. But rather than sharing power, they seek to solve the power inequality problem by denying that power exists at all. So we have the great spate of comedy magicians who do magic, but while so doing, they undercut their own effect on the audience with a wink or a nod, or a wise guy remark. In effect, they deny that any magic occurred. And, indeed, if magic is what happens in the spectator’s brain, in such circumstances, it can’t occur. The actual experience of magic for the spectator is obliterated. By denying the power imbalance, these magicians present the magic community correlative of real capitalists who like to deny that there are in fact any class differences. It’s a false solution to the dilemma of unequal power in magic.

The socialist magicians, however, seek to maximize the magical experience in the spectator without undercutting it. The implicit message is always: “Yes, I have this power to make you feel something special, but I am going to share it with you.” It is a beautifully humanistic way of dealing with the power imbalances inherent in the performance of magic.

Magicians Lennart Green and Dani DaOrtiz with some eye-popping close-up magic in an informal setting. Watch for the . . . uh . . . “kicker” ending.

Dani DaOrtiz is a miracle worker first class. Even if you don’t speak any Spanish you’ll be able to follow most of the video above. His emphasis on the psychology of the spectator makes you feel, oh, right, that stuff isn’t just for the magic textbooks, it’s real and practical. It’s one of the real secrets, and when someone like Dani tells you that, you better believe him, because there are miracles happening in front of your eyes. Dani uses methods that most magicians never even consider. Dani’s technique, perhaps more than any other major close-up magician today, relies not only on sleight of hand, but the personality of the spectator and the magician, and the quality of the communication between them.

Dani’s magic looks like improvisation and jazzing, but his shows are planned. He does, however, constantly adjust to the spectator and fortuitous circumstances. This makes it extremely difficult to backtrack the method for his tricks.  He is part of the Spanish school of magic as exemplified by Juan Tamariz; these magicians’ love and passion for magic is so infectious that the audience’s hearts are totally engaged by the performers’ warmth and sincerity. The magicians study human nature and communication as much as they do sleight of hand technique. The result is a brand of magic that is very emotionally involving–emotion generated by something as silly as a card trick.

If a magician does an Elmsley Count in the forest is it still magic?