Monday morning, Allison Young, a wonderful singer, joins Josh Turner for “Autumn in New York,” in a version you can enjoy in any season.

Monday morning, 60s jazz singer Monica Zetterlund  rehearses her signature song in her native Swedish with Bill Evans at the piano. Great to watch her as her doubt and pleasure register so transparently.

Peggy Lee makes time-appropriate promises we hope she can keep.

Nellie McKay sings Dave Frishberg’s heart-tugger and makes it hers.

I don’t think this is on any of her albums.

Thanks to YouTuber eTown

The wonderfully versatile singer, actor, and songwriter Nellie McKay spoke with us a while back, following her engagement at Birdland in New York City. You can listen to the interview as broadcast yesterday on the Arts Express radio program on WBAI 99.5FM NYC by clicking on the little triangle above.

The influential magician Dai Vernon, known by his peers as “The Professor,” was feted by  his contemporaries at a tribute roast in 1987.  Cabaret singer Pat Cook sung an homage to the 93-year-old magician to the tune of Cole Porter’s “You’re The Top,” but with revised lyrics by Cook. The clever Cook went on in later years to write a Broadway show and is presently the Director of  BMI ‘s Musical Theater and Jazz division. If you’re a fan of magic, you’ll get a kick out of the lyrics Cook wrote for the occasion.

Thanks to magician Michael Ammar who captured the event on film and uploaded it onto YouTube.

Jacques Brel works himself up into a lather singing about the Port of  Amsterdam.

Sometime in the late 1960s, Mort Shuman and Elly Stone got together a quartet of performers and created a show comprised completely of Brel’s songs, translated into English by Shuman and Eric Blau. Titled Jacques Brel is Alive and Well and Living in Paris, it played at a little cabaret in Greenwich Village and became an unlikely hit, winning awards and playing for four years and thousands of performances in revivals.

Shuman sang this song in the original show, and was very impressive, but it was nice to run across this video of Brel himself singing it. As I remember it, the show had a cast album consisting of two LPs, which as far as I know was a first for the time.

There are just a handful of Christmas songs that I really like, and this is one of my favorites. It was written by Hugh Martin and introduced by Judy Garland in the 1944 film, Meet Me In St. Louis. The effervescent Mark Nadler sung this heartfelt version Sunday at David Kenney’s Everything Old Is New Again—Live Holiday Special, and brought the concert to a rousing close.

You can listen to Mark, accompanying himself on piano, singing his soulful version of this Christmas classic, by clicking on the grey triangle above.

The verbally dexterous and tuneful Kim Grogg wrapped her pipes around Cole Porter’s witty patter song, “Come to the Supermarket”, with gusto and panache this past week, singing at the Metropolitan Room’s season finale of Everything Old is New Again Live, produced by David Kenney of WBAI radio, and Frank Dain of Cabaret Scenes Magazine.

This first season has been a real crash course in great cabaret for listeners like me, a cabaret novice, so thanks, David and Frank and all the wonderful artists who have appeared this season.

Although the first live season has now ended, fear not Everything Old is New Again junkies: David’s radio show will still continue to be heard every Sunday night from 9-11pm on WBAI 99.5 FM, NYC, featuring “The Great American Songbook.”

Click on the gray triangle above to hear Kim Grogg wrestle to the ground Cole Porter’s “Come to the Supermarket.”

The exuberant Mark Nadler wants nothing more than to entertain the pants off his audience, and entertain indeed he does. Nadler’s singing and piano-playing showmanship brought down the house last week at the Metropolitan Room’s Everything Old is New Again Live cabaret event, with his rendition of the Cab Calloway standard.

Each month at Everything Old Is New Again Live, David Kenney and co-producers Frank Dain and Cabaret Scenes Magazine present a cornucopia of delights for their audience. This month, the line-up included not only Mark Nadler, but the awesome talents of Baby Jane Dexter, Jeff Harnar, Terri Klausner, Marieann Meringolo, Kim David Smith, Ty Stephens, and Carol Woods.

David’s show can be heard on Sunday nights from 9-11pm on WBAI 99.5 FM, NYC, simulcast on WBAI.org on the Internet. And David’s live cabaret show continues on the first Sunday of each month from the Metropolitan. The next live show will be on Sunday, June 5th. If you’re in the NYC area then, join him for some great entertainment. 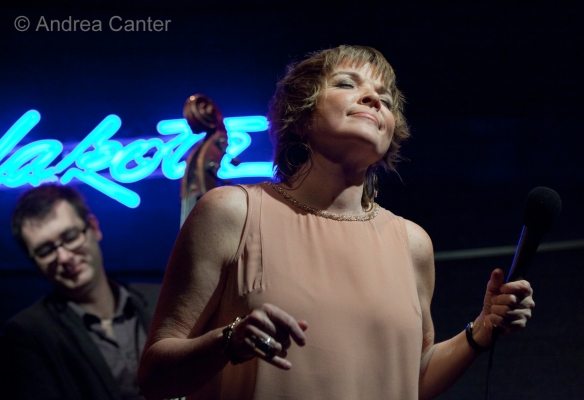 Five-time Grammy award nominee jazz vocalist Karrin Allyson does it all: sings, plays classical and jazz piano, interprets the Great American Songbook with her unique musical sensibility, and writes her own songs. With the informal intimacy and spontaneity that David Kenney fosters at his monthly Everything Old Is New Again Live cabaret series, Ms. Allyson decided to alter her planned program in order to sing one of her own songs for the packed house, apropos for the rainy day in NYC.

Each month at Everything Old Is New Again Live—stationed at the elegant Metropolitan Room—Kenney and co-producers Frank Dain and Cabaret Scenes Magazine present a veritable master class of vocal wizardry and interpretation. This month, the enthusiastic audience was treated not only to Karrin Allyson, but also Jim Caruso and Billy Stritch, Eric Comstock and Barbara Fasano, Natalie Douglas, Stacy Sullivan, Gay Marshall, Nick Adams,  Erich Bergen,  Jonathan Karrant, Dane Vannatter, Ross Patterson, and Jon Weber, experts all at their craft.

David’s show can be heard on Sunday nights from 9-11pm on WBAI 99.5 FM, simulcast on WBAI.org on the Internet. And David’s live cabaret show continues on the first Sunday of each month from the Metropolitan. The next live show will be on Sunday, May 1st. If you’re in the NYC area then, join him for some great entertainment.

Click on the gray triangle above  to hear Karrin Allyson’s  “Wrap Up Some of That Sunshine.” 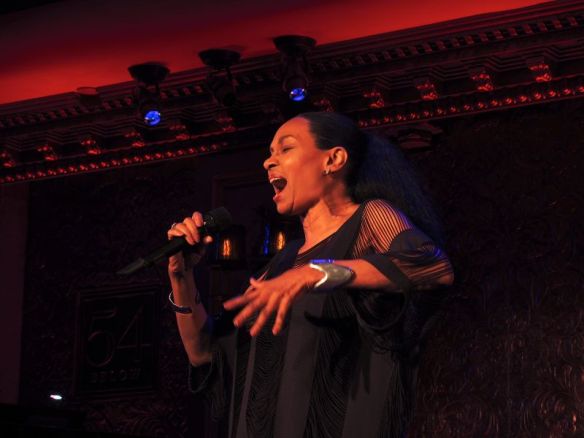 Once more, cabaret maestro David Kenney of radio station WBAI’s Everything Old Is New Again hosted a dynamite cabaret, aired live on WBAI from the chic Metropolitan Room in Manhattan. There were so many great acts, it’s hard to pick just one, but I was particularly impressed by jazz and blues vocalist Vivian Reed. She opened Sunday’s show and wowed the audience. Here you can listen to her interpretation of the Duke Ellington classic In A Sentimental Mood. Listening to her voice, I got flashes of Dinah Washington and Sarah Vaughn. The Drama Desk Award-winning Ms. Reed  is truly extraordinary.

David’s show can be heard on Sunday nights from 9-11pm on WBAI 99.5 FM, simulcast on WBAI.org on the Internet. And David’s live cabaret show continues on the first Sunday of each month from the Metropolitan. The next live show will be on Sunday, April 3rd. If you’re in the NYC area then, join him for some great entertainment.

Click on the gray triangle to hear the soulful Ms. Reed. (Please excuse the technical broadcast hiccup near the end—I just pretend I’m listening to vinyl!) 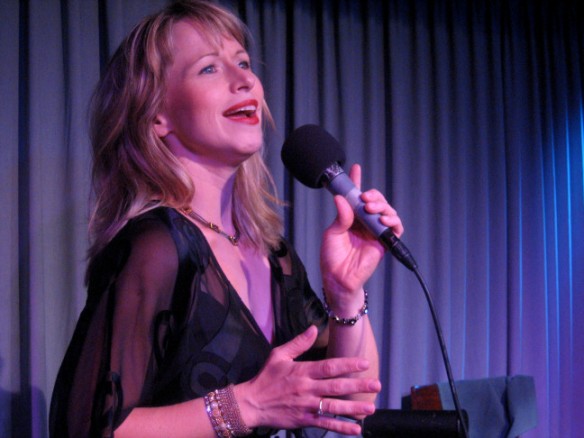 David’s show can be heard on Sunday nights from 9-11pm on WBAI 99.5 FM, simulcast on WBAI.org on the Internet. And from now on, the first Sunday of each month will be hosted live by David from the Metropolitan. Karen Oberlin’s performance  is from the very first of this new series.

Every year the gracious David Kenney, who hosts the WBAI radio program Everything Old is New Again (WBAI 99.5 FM NYC and WBAI.org, Sunday nights, 9-11pm), produces a smashing cabaret fundraiser for the station.  Last year,  the amazing Liz Callaway sang her version of My Grown-Up Christmas List and knocked it out of the park. You can hear her every-word-counts performance by clicking on the grey triangle above.

And if you want to hear the performances of the wonderful line-up of guests that David has for this year’s fundraiser, including Julie Budd and Mark Nadler, tune into his show this week and next.

Class struggle at the docks.

Monday is a day to be committed! Join Dave Lambert, Jon Hendricks, and of course Annie Ross. Because “two heads are better than one …”

What could be more perfect on a Monday morning?

At the cabaret show I attended last week, the wonderful Liz Callaway sang a beautiful Christmas wish in her emotion-filled, crystal-clear voice. Here’s the audio clip from that song on that memorable afternoon (click the orange button):

What happens to great American songs of yesteryear? Well, they don’t die, no, they become staples of cabaret society.

For years at radio station WBAI, Dave Kenney has been preserving and propagating, through his weekly radio program Everything Old is New Again, what he calls the “Great American Songbook”: those great songs, that were mainly Broadway bound, from the likes of George and Ira Gershwin, Rogers and Hart, Jerome Kern, Harold Arlen and Yip Harburg, Frank Loesser, Cole Porter, Johnny Mercer, and so on. It’s a tradition that jazz and cabaret singers have elevated to a whole separate art form, distinct from the legitimate theater.

Last week, Kenney produced and hosted a wonderful cabaret benefit for WBAI listeners at the Metropolitan Room, an intimate and comfortable space in which to host such an event. The talent on display was delightful and happy-making. It was a two-hour master class in the Art of Cabaret. The singers were all veterans of the cabaret and Broadway scenes, and it was fun to watch them cheer each other on.

Performers included KT Sullivan and Jeff Harner, Liz Callaway and her sister Anne Hampton Callaway, Karen Oberlin and Steve Ross, Karen Mason and Paul Rolnick, Eric Comstock and Barbara Fasano, Gabrielle Stravelli and Pat O’Leary. All of them excellent, and all accompanied on the piano by the talented Alex Rybeck, who also composed some of the performers’  songs.

You can see and hear vocalist Gabrielle Stravelli in the YouTube clip above, singing “Goody Goody” at a previous performance. She performed the song at the benefit as well, and her interpretation at the benefit was even sharper and wilder.  She let loose, scat singing and improvising fearlessly, getting to the vindictive core of the song’s lyric:

I think anyone who heard that performance will think twice about ever crossing Ms. Stravelli. (Only joking, joking, Stravelli!) Afterwards, she said, “What can I say?–I love singing revenge songs–I’m Sicilian!”

Thanks Dave Kenney and all the terrific performers for providing such a Goody Goody time.